How To Cultivate Psychological Safety And Create More Effective Teams

How To Cultivate Psychological Safety And Create More Effective Teams 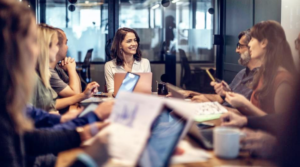 When was the last time you had a meaningful meeting with your team? Not just one where each associate stated their progress on the current project, during which all the other members just stared off into space waiting to take their turn so they could get back to their desks? How about the last time you had a meeting where vital information was shared, ideas for improvement were offered and decisive decisions were made on correcting errors instead of sweeping them under the rug? Imagine how much more productive your team members, and actually the entire organization, would be if the leadership team encouraged, embraced and acknowledged the absolute need for psychological safety.

In a February 2021 survey, McKinsey & Company looked at psychological safety’s role in leadership development. Researchers found that leaders can increase the likelihood of team members’ psychological safety by demonstrating specific behaviors. Out of the four leadership styles studied, the two most successful ones were “Consultative” and “Supportive.” The two that fared much worse were the “Authoritative” and “Challenging” styles of leadership.

As with most things in management, the effective way to ensure psychological safety is from the top down. If the workers in your organization chart don’t see the C-Suite emulating the values that are being touted, the disparity between the edict and the actuality will be hugely obvious. The old “do as I say, not as I do” dilemma is as frustrating and ineffective now as it ever was. Here’s how leaders can cultivate psychological safety in the workplace:

As a manager, are you accessible and approachable? These are valuable and necessary qualities for productivity. I had a friend who was a supervisor at her company where every colleague, manager and above never opened their office doors except to go to lunch. Interacting with management wasn’t forbidden, yet it was not encouraged. The only reason people competed to gain management positions was to isolate themselves from all of their supervisors and the supervisor’s employees. They had no idea what even went on out on the floor, and they didn’t want to know. Any suggestions made to improve the customer experience or workflow were immediately shot down. The number of people in her organization who felt physiologically safe there was zero.

Have high standards — but recognize that everyone makes mistakes.

In 2019, Amy Edmondson spoke at the annual meeting for the Association of American Medical Colleges and told attendees, “The simplest way to hold people accountable is by conveying, motivating, and inspiring high standards. And also going out of your way to create psychological safety, so that when things get missed or bad things happen, people feel free to speak up. The most important insight to know is that this is not a trade-off. There is no trade-off between high standards and psychological safety.”

Fear of management doesn’t create lasting results. You must be genuinely interested in others and learn to control your response when you’re informed of a mistake, thereby helping others learn from mistakes, not be punished for them.

Meet with your people regularly and encourage them to speak up without repercussions. Allow them to share their concerns. When it’s appropriate, avoid giving them suggestions — let them come to solutions collectively so they learn to work together.

Another important component to psychological safety is inclusion. Timothy R. Clark, in his book The 4 Stages of Psychological Safety: Defining the Path to Inclusion and Innovation observes, “Despite knowing we should extend exclusion safety to everyone, we have become very skilled at chasing each other to the margins and patrolling the boundaries. We splinter, segment, and stratify the human family. Sometimes, we extend partial or conditional inclusion safety. Sometimes we revoke or withhold it.”

If some colleagues feel overlooked, marginalized, ignored, persecuted or have had their suggestions shot down at every turn, you (or someone who replaces you) will be tasked with fixing the fragmentation you’ve allowed to happen. Worse yet, if you don’t create an inclusive environment, you could be stunting the growth of your team and your organization.

In her book The Fearless Organization: Creating Psychological Safety in the Workplace for Learning, Innovation, and Growth, Edmondson explains, “In an era when no individual can know or do everything needed to carry out the work that serves customers, it’s more important than ever for people to speak up, share information, contribute expertise, take risks, and work with each other to create lasting value.” Fear limits our ability for effective thought and action — even for the most talented of employees. Today’s leaders must be willing to take on the job of driving fear out of the organization to create the conditions for learning, innovation and growth.

When I was in management, I always told employees, especially ones new to the organization, “Don’t be afraid to ask me any questions. If I don’t know the answer (because no one knows all the answers), I will tell you who can answer your question or we can figure it out together.” How can we possibly get the highest performance out of an employee who is confused about a key portion of their job? Create a safe environment where employees have the ability to help you solve the problems and you won’t be fighting an uphill battle on your own.